Hagia Sophia was originally a Christian cathedral, first Eastern Orthodox and then Roman Catholic, until it was converted to a mosque in 1453. When it was completed in 537, the Hagia Sophia (which means “Holy Wisdom) was the largest cathedral in the world.  It retained that honor for 1,000 years until the Seville Cathedral was completed in 1520.

When the Hagia Sophia was converted to a mosque in the 1450s, the bells, altar, iconostasis, sacrificial vessels,and other Christian relics were removed.  The mosaics depicting Jesus, Mary, Christian saints and angels were either removed or plastered over.  Islamic features — such as the mihrab, minbar, and four minarets — were added. Hagia Sophia reopened as a secular museum in 1935, and it retains both Christian and Islamic influences and features today.

It took me two “One Thing, Three Ways” posts to do Sacre Coeur justice.  Why would I think the world’s largest cathedral for a thousand years would be any different?  Here are my first three favorite shots of Hagia Sophia in Istanbul.  What do you think?  Do you have a favorite below? 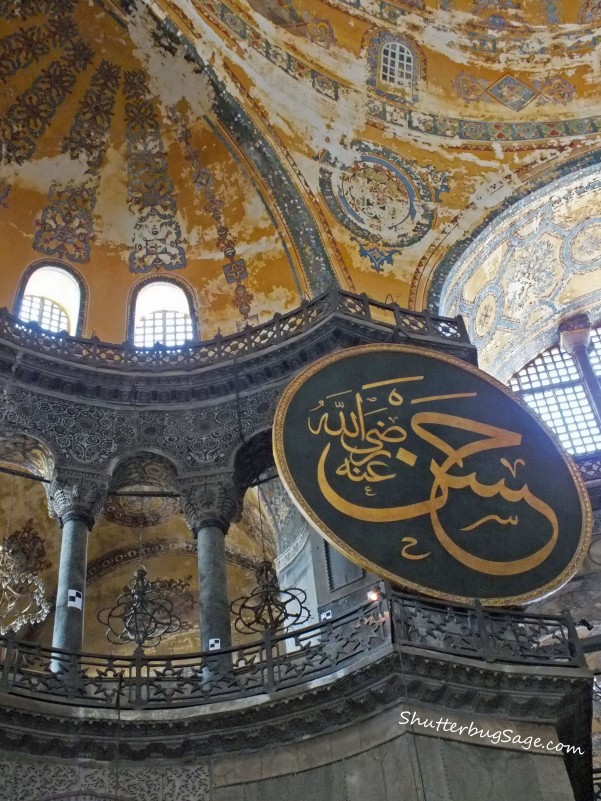 Hagia Sophia Photo #1.  Looking up at her massive dome where painted plaster is sometimes removed to reveal the original mosaics and finishing below.

Hagia Sophia Photo #2. The Hagia Sophia has 40, large arched windows in the area where worshipers sit and is famous for reflecting mystical light.

Hagia Sophia Photo #3.  A minbar is a pulpit in a mosque where the imam stands to deliver sermons.

On Today’s Date in the Past: